Vanishing of the Bees – 22 October

Elinor has asked everyone in Bungay Community Bees to write a post about our First Year. So I thought I’d post a review I wrote this time last year about the documentary film, Vanishing of the Bees, which some of us are going to see this month.

I went along to the Geldeston Village Hall and talked with several Waveney Beekeepers, who were all concerned about the phenomenon. I didn’t know anything about beekeeping, though I have had a lifelong passion for honey, especially single variety honey (heather is my favourite).  Now I do. I’ve immersed myself in the subject, talking with the BCB beekeepers, making frames, peering into the colonies and seeing the colonies hard at work.

Working alongside Eloise with the Bee Flower project, I’ve got a pretty good idea now which plants bees love – why they circle round poppies, hum over willow trees, check out  sunflowers. At Midsummer I walked with Elinor’s son Reuben to see the Barsham hives. We stood there at dusk in front of the two hives. Everything was quiet. They are asleep, he announced. And that was a magical moment to be standing there at the apex of the bee year, the moment once danced and celebrated all over the land as the Queen takes her wedding flight into the sky.

Bees are magical. What they do amongst the flowers and trees enables us to live in the fruitfulness and the sweetness of the earth. This film inspired me to put my attention on keeping life this way. And Bungay Community Bees has helped me put this into action. Thank you Elinor, Gemma and Hugh for showing us everything about bees and for writing for this bee blog! Hope all the hives have a good winter and are making good use of all the great ivy flowers around. 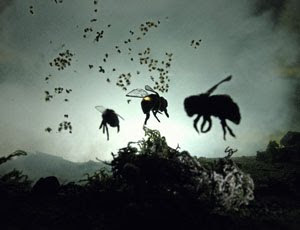 Last night at Geldeston Village Hall was buzzing. Over 60 people, most of them beekeepers, from the Waveney Valley, had gathered to watch the documentary film, Vanishing of the Bees. This film investigates the syndrome known as colony collapse disorder that has decimated bee populations throughout the world. Said Brian Norman organiser of the Geldeston Village Screen and also a beekeeper “When I signed up for the CO-Op Plan Bee and received an email about the film screening in Norwich, I rang up the distributors and asked if could we have it here.”

The film documents the phenomenon as it emerged in the United States in 2005, Bees have also been effected particularly in the last two years in Britain. Beekeepers have lost 30% of their hives. Footage of Suffolk Beekeepers and ex-MP Ian Gibson marching to Parliament to present a peitition last year caused a great cheer amongst the audience. The documentary confirmed what many of them knew from experience. Bees were disappearing in their millions and this was affecting not only the production of honey in every country, but the bees great task of pollinating the trees, fruit, vegetables and herbs that make up a third of what we eat every day.

“You like rice?” asked one commercial American beekeeper. That’s what you will be eating. Rice, wheat and corn.”

“It’s telling us what we have felt for a long time – it’s the pesticides,” said Keith Wilkinson, also of Waveney Beekeepers, and founder of the Iceni microscopy group, set up to study bee diseases. “Right now we’re at a tipping point.”

The disappearance of bees has coincided with the use of pesticides known as neonicotinoids. These damage the bee’s immune system in subsequent generations, making them vulnerable to disease and ultimately cause the collapse of the colony. Manufactured by the agro-chemical company, Bayer CropScience, these chemicals also affect the ability of the bees to navigate – they suffer from loss of memory and co-ordination, and literally cannot find their way home. CCD is a consequence of monocultural farming where the bees are not only under attack by up to 50 different chemicals used in the field, but also suffer from lack of bio-diversity from single crops that only provide nectar and pollen for a short time of the year.

Many of the scientists quoted in the film see these symptoms as a sign of deterioration and breakdown in all eco-systems, including human beings, examples of which include autism and attention deficit disorder.

“Bees are first on the line,” added Bob Spruce, chairman of Waveney Beekeepers. He has seen a vast difference in the farming methods from his grandfather’ day, most of it due to the use of pesticides. “The sprays are the problem and they go everywhere into all part of the plants, even into the dew that is collected by the bees. They affect the birds who eat the bees, the mammals and everything along the chain.”

Geldeston honey is fragrant, made of local marsh flowers, ivy, horse chestnut, bean and lime flowers, but bees are still disappearing, even here. Norfolk beekeepers are opening their hives and finding them empty, though not quite on the scale of the USA where monocultural farming practices are on a huge scale and bees are transported thousands of miles to pollinate the almond groves, blueberry and cranberry fields. Bees are now flown from Australia to do this essential work.

“It’s a very worrying and not completely surprising symptom of our completely unsustainable lifestyle”, remarked Graham Eliot, local organic grower and parliamentary Green Party candidate for Waveney. “It’s an uphill struggle to address because so much is invested in our industrial agricultural system.”

The neonicotinoid pesticides are illegal in many European countries, including France, Germany and Italy. Governments in England and the United States have made no move towards banning their use.

“The money has gone to building a data base, rather than research into the effect of pesticides”, said another beekeeper. There is also concern the research is for all pollinators (2000 species of which the honey bee numbers only four). Due to current agricultural practices he has been feeding his bees for the last three months. There are just not enough flowers to feed them.

Meanwhile other organisations and individuals are taking matters into their own hands: The Co-op who are distributing the film  have now banned the use of these chemicals on their farms throughout Britain. Associations such as the WI have given their full-backing to beekeepers. This week is their Bee Action Week as part of their SOS for the Bee campaign launched this year.

On a local level Waveney Beekeepers have seen a huge increase in interest in beekeeping and have recently given run free beekeeping courses to teach anyone this time-honoured art. Transition initiative, Sustainable Bungay are starting their own Community Supported Beehives, gardeners everywhere are starting to growing flowers for the bees in their gardens and windowsills and local and sustainably-harvested honey has become highly-sought after. But perhaps the most effective way individuals and family can help starts at the table. In the words of Michael Pollan, author of In Defense of Food:

“Voting with your fork is a very powerful thing. Because you can nurture food systems that protect the bee.”

What can we do? is a question beekeepers are frequently asked. The answer is by eating fruit and vegetables grown without chemicals on organic farms or in local allotments and gardens which support a strong diversity of wild and domestic plants we will be giving pollen and nectar to one of our greatest allies on earth.

Vanishing of the Bees was the first film to be shown at Geldeston Village Hall using their own equipment.

BCB is going to a showing of the film at Poringland on 22 October. £3 entry fee (membership of community centre for the night). For more info contact Elinor  at elinorgalaxy@gmail.com

For more info on The Co-op’s Plan Bee

For more info on Bee Action Week and SOS for Bees
www.thewi.org

For more info on the film
www.vanishingbees.co.uk