Sharing the Load – A Permaculture Workday

By
Mark
– Posted on 18th December 2011Posted in: Events News 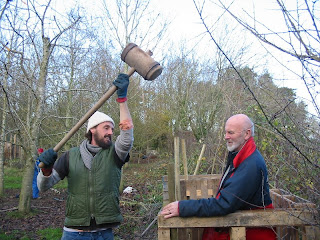 On Saturday December 3rd, I joined a group of East Anglian perma-culturists and fellow transitioners for a work day at Eloise and Kris’s place on the Suffolk -Norfolk border.

“The idea of work days is simple and great!” said Eloise, who has been studying permaculture for the past year. “Invite your friends round to help with some big jobs or projects you want to get done in exchange for lots of nice food, company and good fun! And help on their plot another day!”

Shared work days are part of permaculture’s ethos and practice, including in Transition Norwich’s own permaculture group. 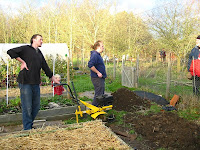 It was sunny, mild and dry and over twenty people had come to help out with building a new compost area, preparing raised beds, rotavating, mulching, chopping bundles of kindling in the coppiced wood area for an earth oven and making chicken tractors.

Chicken tractors are small tunnels bound together with long sticks and covered in wire netting under which you grow plants for chicken feed. The chickens can’t get in whilst the plants are growing but when they’re ready you make a door so they can enter. The long sticks were made straight from from the coppiced wood out of ash, oak and horse chestnut. 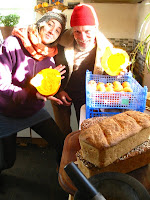 I went to the kitchen and made a pumpkin and carrot soup with Brenna. Her first baby was due the following week and I was really struck by how relaxed both she and her partner Callum were about it all.
There was fresh bread, delicious bean stew and coleslaw for lunch along with all sorts of cakes and biscuits. Everything was homemade and a lot of the veg homegrown. At lunchtime everyone crowded in the kitchen and the stew was devoured, but it was so filling there was no room for the pumpkin soup – no problem, it would be just right for dinner. 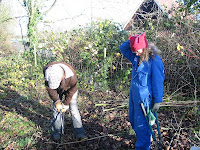 I was also on a deadline for This Low Carbon Life, so whilst I did cook, rotavate, help with a raised bed and take down some old runner bean stalks, my attention was rather divided. Several times I tucked myself away in Eloise’s office until I’d knocked a very different post into shape from the one you see in the top picture.
Meanwhile Charlotte was seriously reskilling in the field: learning from Brenna how to make a solstice wreath (now on our front door) out of the boughs of yew, ivy, cypress, bay and holly as they sat around the fire in the yurt; from Callum, who is a carpenter, how to make a raised bed from four pieces of wood without nails (with luck we’ll make our first raised bed here next year); from David – a maker and blacksmith who spent many years working in Africa on low-tech solutions – how to sharpen secateurs and shears, and to use her Opinel knife to whittle sticks into pegs; from David and Lee how to make a compost bin out of wooden pallets. 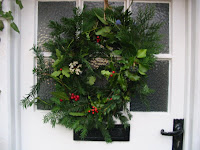 “What I really liked was being shown directly by the makers how to do these things,” she said “You’re finding out how to it physically, with your hands, with your eyes, listening and watching. You can ask them questions, they can guide you. This is very different from reading about how to do things in a book or on the internet.”

I did learn how to use the rotavator Kris picked up for £50. And that after you rotavate you put the compost on, then the topsoil. “You can borrow it next year for your raised bed,” said Kris “It can cost you £50 a time just to rent one.”
I’m off to do a bit of teaching myself today (Sunday 11th December) with Bungay Community Bees: how to make a Yarrow herbal salve. We’ll be using this year’s beeswax from the group’s hives (and sampling our first honey!) And there’ll be a write-up of it here soon. Gotta get going….